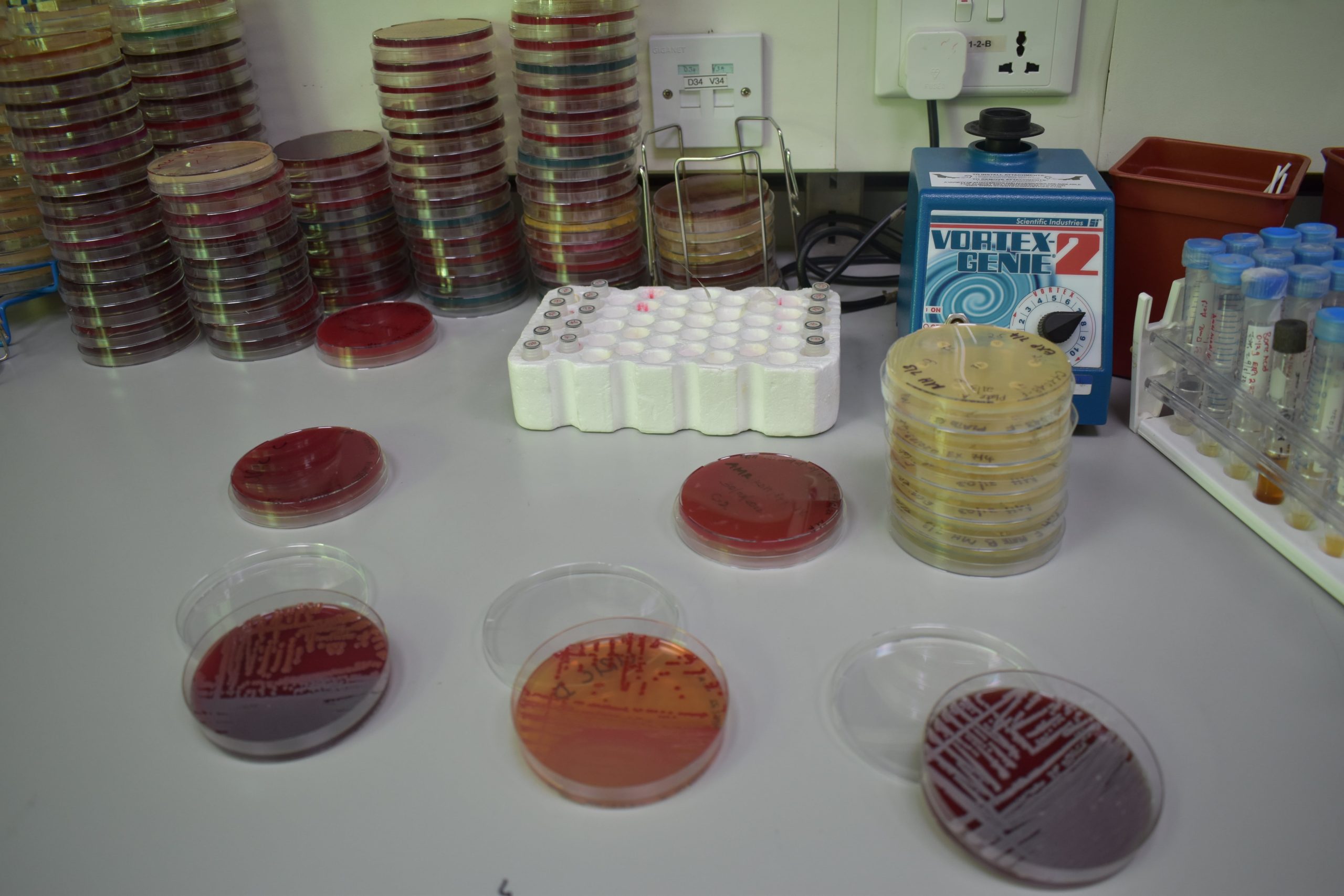 “We had received a one year-four-month-old baby who had been referred from Garissa. She was extremely sick on arrival. Though she had meningitis, inflammation of the lining of the brain, the prolonged hospitalization had caused the infection to spread from the brain to the whole body, resulting in septic shock (infection of the blood),” narrates Dr. Merab Odongo, physician with experience in critical care, Mater Misericodiae Hospital.

Dr. Odongo says that by conducting an antimicrobial sensitivity testing (AST) on some fluid samples they had acquired from the baby, they were able to identify the bacteria and treat the infection. “Within four months, the child was healthy and released from the hospital,” she says.

In 2021 during the celebration of the annual antimicrobial awareness week in Kenya, Dr. John Kariuki, a Veterinary Surgeon, Ministry of Agriculture, Livestock and Fisheries, narrated his ordeal with severe infection after sustaining a hip bone fracture, following an accidental slip and fall in his bathroom.

The suspected fracture resulted in a corrective surgery and a week in hospital under antibiotic and painkillers therapy. He was later discharged but on returning to the hospital two weeks later for wound dressing, he was admitted to the intensive care unit (ICU) with a septic surgical wound.

Three days later, he was stabilized and moved to the general ward where he was put under a negative therapy pressure machine which was sucking the discharge from the wound as he continued using oral and intravenous antibiotics.

With the discharge not stopping and the wound continuing to swell, he moved to two additional hospitals with no notable change. He was becoming worse. By the time he reached the fourth hospital, his kidneys were beginning to fail.

It was only after being referred to the fifth hospital, where an AST was conducted on him, that two types of bacteria were identified. One of the bacteria was found to be multi-drug resistant. After being put on the appropriate treatment, there was tremendous improvement.

The World Health Organization (WHO) notes that antimicrobial resistance (AMR) occurs when bacteria, viruses, fungi and parasites change over time and no longer respond to medicines making infections harder to treat and increasing the risk of disease spread, severe illness and death.

AMR alone can kill more people than Malaria and HIV/AIDS. In 2019, bacterial infections that did not respond to antibiotics (AMR) resulted in more than 1.2 million deaths worldwide, compared to malaria and HIV/AIDS which resulted in 640,000 deaths and 860,000 respectively, according to a study carried out in 204 countries across the globe.

WHO says that if no action is taken, AMR can result in 10 million deaths annually by 2050.

“Bacterial infections are some of the biggest problems that are plaguing the health industry. The reason is that we are using antibiotics a lot to treat infections,” said Dr. Lilian Musila, Principal Scientist at Kenya Medical Research Institute (KEMRI) during a symposium on bacteriophages in Nairobi.

According to Dr. Musila, findings from KEMRI’s on-going clinical studies conducted on AMR from samples drawn from different hospitals in Kenya have shown that about 45% of the bacteria are multidrug resistant, with some even showing higher resistance.

The National Action Plan on Prevention and Containment of AMR 2017-2022 notes that there is a rising trend in AMR in key Gram positive and Gram negative bacterial pathogens including methicillin resistant Staphylococcus aureus (5–10%) from hospitalized patients, reduced susceptibility of community acquired pneumococci (19%), multidrug resistant extended spectrum beta lactamase producing Salmonella Typhimurium (65%) and Vibrio cholerae (68%) as observed from outbreaks in Kenya.

With increasing resistance to flouroquinolones also reported in typhoid outbreaks (25%), we have few antimicrobials options for treatment of these infections in resource limited settings, the Plan reads.

“The most common time you see AMR is with severe infections. The patients with these severe infections, clinically referred to as sepsis and septic shocks, are the ones who end up in the intensive care unit (ICU) settings,” Dr. Odongo says.

According to her, these are the patients who require broad spectrum antibiotics because they are somehow resistant to smaller classes of antibiotics that are available.

In agreement, Dr. Moses Masika, a virologist at the University of Nairobi, notes that the test helps physicians to avoid unnecessary use of medicines while ensuring that the patient gets what they need to clear the infection.

“Blind treatment often leads to misuse or overuse of medicines, so we should make every effort to test for AMR in order to guide treatment,” he said.

Dr. Anish Okeyo, a Clinical Pharmacist and Chairperson of the Antimicrobial Stewardship (AMS) at Thika Level 5 Hospital, says to improve rates of survival for critical patients especially in ICU settings, doing culture and AST are very crucial, adding that there are some classes of drugs, such as meropenems, carbapenems and glycopeptides, among others, that you cannot use on the patient before confirming what exactly they are resistant or sensitive to.

How does the test work?

For the test to be conducted, samples of any type of body fluid, including blood, urine, stool, cerebral spinal fluid (fluid that circulates in the brain but is taken from the spine) or a purse swap, among others, are taken from the patient, Dr. Odongo explains.

The fluid is then subjected to a microbiological culture test where the bacteria will be identified from the sample that was collected. This normally takes 48 to 72 hours.

However, she says, there are bacteria that take longer to grow. For example, tuberculosis (TB) takes upto two weeks to grow, “but now we have a DNA test for TB so the patient will not have to wait for two weeks for the diagnosis because we can do a gene Xpert”, she reassures.

Using clinical and laboratory standards institute (CLSI) guidelines, which show panels of drugs to test for a particular organism and the zone interpretation for that organism, the bacteria obtained is subjected to AST where it is exposed to various antibiotics. From there, an AST report is generated.

“The AST report gives the physician minimum inhibitory concentrations (MICs), cut offs based on the four, five or six antibiotics tested (least amount of concentration of antibiotic X needed in a patient to be able to eliminate the bacteria in them). It is upto the physician to know which antibiotic to choose. There will be resistant ones or sensitive ones. The sensitive ones are the ones that can be administered to the patient,” Dr. Odongo says.

Even though the tests are crucial, resistance is something progressive. Thus, the physician can have a report showing that a patient will be sensitive to a certain antibiotic but because bacteria mutate, the antibiotic that was sensitive can become resistant, she says.

Dr. Odongo adds that the tests are also expensive as they are not done independently. Other things have to be put into consideration, including long stay in the hospital, care given during the hospital stay and the cost of antibiotics, among others.

Thika Level 5 Hospital is one of the public hospitals where AST is being carried out. According to Dr. Okeyo, the testing started as early as 2018 and they have been conducting sensitizations on the clinicians and other healthcare workers on good AMR stewardship which includes when to administer antibiotics and the need for conducting ASTs. However, the rate of antimicrobial testing is still low.

He notes that the biggest challenge to the uptake has been the fact that the majority of the hospital’s workforce are temporary as most are interns who come to the hospital on yearly or half-yearly basis hence they have to keep conducting training on antimicrobial stewardship.

Additionally, Dr. Okeyo says being a public hospital, sometimes you find all the spectrum of antibiotics that are resistant to the bacteria are not available, forcing the the doctor to just use the available medicine that may not be effective in treating the patient.

Wangu Githae, Head of Microbiology at the Thika Level 5 Hospital, notes that though the testing rates  are low, there has been slight improvement from an average of 30 samples per month in 2020 to about 100 samples per month as of March 2022.

Additionally, she says the hospital is only using manual methods, such as exocrine pancreatic insufficiency (EPI) and other bioclinical methods, which sometimes makes identification of organisms challenging. “Automatic machines would help improve the work by making the results more accurate, save time and even help in doing some complicated tests,” Githae adds.

Besides improving treatment outcomes, the data generated from these tests also help in contributing to the national AMR surveillance system in accordance with the AMR National Action Plan 2017-2022. This is because of the five objectives outlined in the plan, the second objective advocates for strengthening the knowledge and evidence base through surveillance and research.

The purpose of surveillance is to be able to tell at the level of the health facility, county or in the country which antibiotics are working and which ones are not working based on a pattern of pathogens that have been detected over time, says Prof. Sam Kariuki, Acting Director General of KEMRI.

“With proper information and sharing of surveillance studies across borders, targeted approaches and treatment strategies may be developed to limit the spread and emergence of pathogens with AMR,” the plan reads.