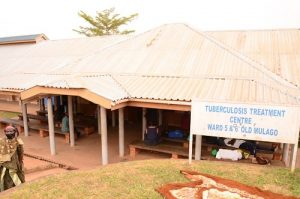 While attending a tailoring workshop in Luwero district in 2020, Faridah Namukwayo, 22, developed a little cough.

For three weeks, Namukwayo took this as a usual cough that occasionally attacked her after a common cold or flu.

However, everything changed when she coughed out blood in the sputum and was shocked by it.

“I went to Kassana health center III. I was tested and found with Multidrug resistant tuberculosis (MDR TB) and referred to Mulago National Referral Hospital,” she recounted.

Mulago national referral hospital is the designated center for treatment of MDR TB in the central region of Uganda, serving eleven districts.

To Namukwayo who had witnessed the burial of many people who died from Mulago hospital albeit of different illnesses, this referral was like a death sentence and yet she felt that her condition was not so bad as to warrant a referral there.

Apart from coughing, the girl felt well; she was strong, able to cook food, fetch water, wash clothes and perform other household chores.

The health workers accompanied Namukwayo home as she went to prepare her belongings for the shift to Mulago. They also used the opportunity to counsel her mother and family members from whom sputum samples were obtained for testing.

Namukwayo was taken to Mulago and admitted in the TB ward. After spending one week during which the doctors carried out various tests including blood culture, heart performance tests and others, Namukwayo began her nine-month treatment for MDR TB, swallowing 20 tablets every morning until she was declared TB free.

As she underwent the tenuis treatment regimen, Stephen Ludigo, 44, of Makindye, a Kampala city suburb had to even brace a severer one lasting for 18 months.

Ludigo developed a dry cough that quickly deteriorated with onset of weight loss and within one month, he was already too weak to walk, talk or eat food.

He asked to be taken to Joy Medical clinic in Nteeba from where his TB positive status was discovered. But the doctors sent another sample to Mulago for GeneXpert tests which confirmed that Ludigo had MDR TB.

The World Health Organization (WHO) defines MDR TB as the type of TB that does not respond to at least isoniazid and rifampicin, the two most powerful TB drugs.

It says the two reasons why multidrug resistance continues to emerge and spread are mismanagement of TB treatment and person-to-person transmission.

WHO further notes that most people with TB are cured by a strictly followed 6-month drug regimen that is provided to patients with support and supervision.

However, inappropriate or incorrect use of drugs, or use of ineffective formulations of drugs such as use of single drugs, poor quality medicines or bad storage conditions, and premature treatment interruption can cause antimicrobial resistance.

Mismanagement of TB treatment procedure was the case with Albert Okuti, a resident of Onzivualiku village in Arua city who underwent first-line treatment for TB for six months, and was then diagnosed with MDR TB.

His case began in 2012 with a long irritating cough and a burning effect in the chest and the back and loss of appetite.

This went on for three months and then Okuti decided to go to Arua Hospital, whereupon he was tested and found with TB.

He was put on rifampicin for six months during which he took four tablets daily but without success. In the seventh month, Okuti was test-reviewed and the medics discovered that his TB had progressed to MDR.

The health workers briefed and counseled his family members and admitted him for one month at Arua hospital to start MDR TB treatment.

“At that time I was taking 16 tablets daily and there was no program of food assistance like it is today,” he says.

Okuti’s wife divorced him due to fear and mounting stigma from the community and when he was discharged after one month to continue treatment from home, the locals nearly lynched him, alleging that he was going to spread a deadly variant of TB in the community.

No amount of cajoling by health experts could dispel the stigma against him until the internal security operatives took charge of his safety.

He stayed isolated at home, lonely and only assisted by his two children for 24 months until he was retested in 2015 and found negative of TB.

Okuti began farming and produced a lot of food which he gave out to people, thereby shaming those who were stigmatizing and advocating to kill him.

None of Okuti’s close contacts tested positive for TB. However, WHO cautions that antimicrobial resistant bugs can be transmitted, especially in crowded settings such as prisons and hospitals.

Dr Susan Akello, the in-charge of the TB Unit at Mulago hospital notes that in Uganda, crammed slums around Kampala and upcountry towns are hot spots where MDR TB is endemic.

While Namukwayo, Ludigo and Okuti went to the health center on their own after feeling unwell, Dr Akello says the health seeking behavior of most Ugandans is so bad that they don’t go to a health center even when they are sick.

As a result, many people with multidrug resistant TB remain undetected in the communities, she said.

Dr Akello’s assertion is not without precedence as in 2016, Uganda’s TB incidence rate was reported by the Ministry of Health to be 253 people per 100,000 population with 89,000 people annually becoming infected.

This puts Uganda among the 30 high TB burden countries in the world with the ministry estimating that there was 1.4% MDR TB among all new infections and 12.1% among previously treated TB cases.

This eventually rose to 395 in 2017 when the patient contact tracing was introduced as part of the United States Agency for International Development (USAID) supported defeat TB program.

And of all the MDR TB cases, 66% were men while women constituted 34% with Dr Akello suggesting that this could be because men smoke more, drink alcohol more and stay longer in crowded bars.

Besides, Dr Akello says treatment success rates were also low prior to 2017 while death rates were as high as 16% because many patients abandoned treatment and health workers were unable to follow up with them.

Prior to the report by the Ministry of Health, the Uganda National Academy of Sciences reported in 2015 that antimicrobial resistant infections contributed to 37% of all hospital admissions in Uganda of which pneumonia and TB were the most rampant, accounting for 18.4% of hospital deaths.

With the USAID’s technical support, Mulago hospital undertook innovations to improve the treatment success rate by carrying out a mixed model of MDR TB care and management.

Dr Akello said a root cause analysis led to the development of a tailored package of changes to address the drivers of low treatment success rate.

One of the key outcomes was the emphasis on patient led contact tracing for which community linkages facilitators were recruited.

Mary Juliet Akwaso, is one of the three such facilitators at Mulago hospital. She says when patients arrive at Mulago, they are handed to the doctors who take their records and subject them to rigorous medical examinations upon admission.

Then the community linkages facilitators takeover the tracking process by locating their home, obtaining phone contacts and visiting the homes after obtaining verbal consent from them.

“We go to their home, screen the family members for TB, especially those who have been coughing for the preceding two weeks,” disclosed Akweso.

She says they take sputum samples from family members with coughs for GeneXpert test while those who don’t have coughs are taken for X-ray tests because sometimes people have MDR TB but do not cough.

In Arua, the importance of contact tracing came into focus in 2018 when investigating the close family members of Benjamin Ladu, a South Sudanese refugee who was found with MDR.

Cathy Ezaru who was caretaker for both Ladu and his sister, Joyce Araba, said by the time Ladu was diagnosed with MDR TB, Araba had stayed back in South Sudan.

His cough began in 2016 when he and his sister were in South Sudan but when it deteriorated, Ladu moved to Uganda in search of better treatment while leaving Araba back in South Sudan.

He was admitted at Arua hospital for one month’s initial MDR TB treatment and discharged to continue treatment from home with the health workers stating that the germ was already suppressed and could not be passed on to another person.

But his terrified family decided to isolate him in a separate room, bought separate utensils for serving him food and only Ezaru was allowed to deal with him.

During the first six months of his MDR TB treatment, the medics gave Ladu daily injection plus tablets and after that he continued taking tablets for another 14 months.

By the time Ladu was declared TB free in 2018, his sister, Araba, developed a serious cough. She was called to come to Uganda for testing and was found with MDR TB and the family isolated her in the same room where Ladu was isolated until her treatment was over.

Ezaru says the family is relieved that after a long period of looking after patients of such complicated diseases they are once again living normal lives.

Akwaso says that medics always have higher chances of obtaining positive results when they trace contacts of patients.

She says this has helped them to map out TB endemic areas – Katanga, Kasubi and other crowded slums in Kampala.

To boost the community linkages facilitators, Mulago hospital enlisted the services of expert patients, comprising previous MDR TB clients whom it has successfully treated of the disease.

Mulago hospital handles the biggest number of MDR TB patients in the country since it also covers the most populous centers.

The MDR patients’ treatment at Mulago accounts for about 25% of cases discovered in the country. Because of this, when Mulago hospital scores any achievements, that automatically translates positively in the country’s performance.

Other partners such as the AIDS Support Organisation (TASO) provided food assistance to MDR TB patients to encourage them to adhere to treatment.

The results of these concerted efforts showed an upward trend in the number of MDR TB cases detected and initiated on treatment at all treatment centers by the end of 2019.https://datawrapper.dwcdn.net/hweZ8/8/

Dr Akello said in 2019 there were 16% deaths among MDR TB patients and 4% of the patients got lost to follow treatment.

The health ministry’s quarterly review for 2019 indicated that the TB detection rate for Uganda had increased by 5.1% to 82% but still below the targeted 84%. This prompted the ministry to develop a field guide for the health workers to help in the management of MDR Tuberculosis.

Why the slow progress

Health workers have pointed to various constraints to explain the limited progress made towards combating MDR TB as they try to use patient led contact tracing.

At the health facility level many of the issues revolve around poor attitude of health workers towards patients, the long and stressful treatment period and lack of support enablers such as transport to reach the health facility.

Akweso says sometimes patients do not have home phone numbers, others are homeless street people and some are drug addicts who take the long and tedious treatment regime as a waste of their drinking time.

“They don’t make the right decisions because they are consuming contraband drugs like marijuana and alcohol. Other people tell lies because they fear stigma since a lot of people attribute TB with HIV,” she explained.

She recommended upscaling of counseling services to  deflate some of the myths among the community in relation to MDR TB treatment to increase success rate and end antimicrobial resistance.

This story was first published in West Nile Today News