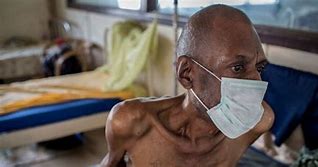 This resistance is often as a consequence of either improper treatment plans such as the case of using witchcraft or failure to ensure that patients complete their treatment.

Some people used to mistake TB for poisons or witchcrafts and didn’t go to hospitals to get treated. By the time they were found they were already too sick and some even died.

To deal with MDR- TB, one of the initiatives being used by the Rwandan government is the use of Community Health Workers (CHWs) to educate people on the signs of TB and direct potential patients to nearest health facilities to get tested and commence early treatment.

The prevalence rate of MDR-TB in Rwanda is 1.4% among new TB cases and 4.9% among previously treated TB cases.

“Community health workers help us in sensitizing the community about the symptoms or signs that can make someone guess that what they have could be tuberculosis and that when treated it can be cured,” says Dr. Yves Habimana Mucyo, the Director of the MDR-TB Unit at Rwanda Biomedical Center.

“The other thing they do is to accompany the tuberculosis suspect to the nearest health facility to get tested and treated as soon as possible; they even help in supervising how they take medicines correctly while ensuring it is on time.”

The CHWs program was initiated by the ministry of health in Rwanda in 1995.  Following the adoption of health decentralization policy in 2005 the Ministry of Health increased efforts to train and provide supplies to CHWs.

The aim of CHWs program is to increase uptake of essential maternal and child clinical services through education of pregnant women, promotion of healthy behaviors, and follow-up and linkages to health services.

According to Jean Marie Vianney Hategekimana, a CHW from Byimana sector, Ruhango district, they pass through their communities and every possible TB patient and then bring them to hospital.

Those who are confirmed to be sick are assigned to CHWs who follow up every day to ensure that they take their medicine (Directly Observed Treatment), and they accompany their patients all along the period of treatment and advise them on healthy behaviors.

For those with drug resistant TB, they are only handed to CHWs after the doctors confirm that they are no longer contagious.

Dr. Habimana specifies that in 2013 they got a new tuberculosis testing machine (Xpert MTB/Rif) a cartridge-based nucleic acid amplification test (NAAT) for simultaneous rapid tuberculosis diagnosis and rapid antibiotic sensitivity test. It is an automated diagnostic test that can identify Mycobacterium tuberculosis (MTB) DNA and resistance to rifampicin (RIF) in only 120 minutes.

From that time, they started to discover many TB cases, working hand in hand with CHWs who entered deep in their villages and helped to bring patients to be tested on time.

These machines were decentralized to various health facilities in the country. Currently, there are 80 machines which are helping to detect TB cases quickly and early before it becomes severe.

Marlene Mukangamije, a woman in her 50s says that when she was diagnosed with TB she didn’t believe it. At that time, she was a respected public worker in one of the most frequented offices of the government.

“They told me to take medicine every single day in six months, no alcohol, but still I had to attend galas and socialize, this is also part of my job. I couldn’t imagine saying loudly that I had tuberculosis, many people would have stigmatized me, I couldn’t risk my name for that minor health issue,” said Mukangamije.

Mukangamije used to take medicine daily but after one month she was no longer able to keep it up, she went back to her normal life as if nothing happened. Two months later, she was now very sick and couldn’t even go to work.

Mukangamije couldn’t resist the humble help from the community health worker in her village who called on the ambulance and considering her situation they directly took her to Kabutare center for drug resistant tuberculosis treatment.

“I was hospitalized for almost three months, only my husband was allowed to visit and he had to cover himself as if I was myself some kind of disease. This situation made me furious and I started regretting. If I could go back, telling my colleagues about my sickness and trying to cope with the social distancing was way better than this,” added Mukangamije.

Mukangamije was diagnosed for drug resistant TB and got treated for almost 15 months. When she came back, she was already replaced at her job and had to transfer to a lower position. She is not an official community health worker but helps to mobilize people against drug resistant tuberculosis in her community.

The way to success still has some obstacles

Dr. Habimana says that in the fight against MDR-TB they still face some challenges, one is the ‘drop out’ of some patients who after taking medicine for some time, start to feel relieved and stop the medication.

He calls on the entire population to join the fight against MDR-TB by getting early testing whenever one feels like they have one of the TB symptoms, taking medicine properly and adhering to doctors’ advices as well as getting tested periodically for patients on medication in order to assess the progress of the tuberculosis treatment.

This story was first published by Fezaa