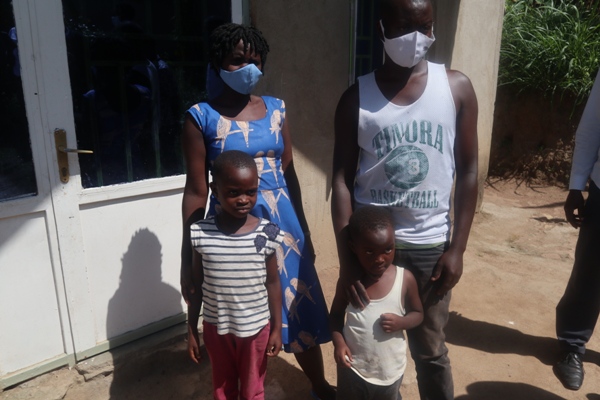 By André Gakwaya -Ruhango: Iradukunda Yvette, is a 23-year-old young woman. She lives in Kavumu village, Rwoga cell, in Ruhango sector, Ruhango District. She is in consultation at the Kigoma Health Center to benefit from family planning services. She is married and the mother of a three-year-old girl.

“I came to this Health Center in order to limit births. I got married too young when I was 17. I was late in having a child. I had a hard life while my husband was on duty and not living with me. In the sequel, I was lucky to have a little girl who is three years old now. I still believe that having too many children hinders growth and good living conditions in the household. Too many children are a heavy burden on the woman who no longer has the time to work to improve the lives of her family. So I decided in agreement with my husband to limit births and have the second child in at least five years, “says Iradukunda.

She adds that after this period, she will have strengthened her capacities to provide for the education, nutrition and good health needs of her children.

“In my family, we are four children. But my parents could not afford us an education due to their limited means. I found an NGO that subsidized my education. I have to work and finish the hotel business well so that the fate I have known is not that of my children. There are people in our neighborhood who have a lot of children. The mother cannot look for work elsewhere, because the household would experience damage without her permanent presence at home. Besides, I know an aunt in town who had eleven children. She gave birth every year. It was difficult to feed and educate all of her children. When I visited them on vacation, there was not food for everyone. I came home emaciated. The children fought over the plate at mealtimes. It is deplorable to make your children grow up in such poverty and appalling malnutrition, because we have not been able to plan the births, ”Iradukunda points out.

Usanase Jean-Paul, 34, mason, and his wife, Triphine Murangamirwa, 32, a seller of agricultural products at the market, have also lived in the Kigoma sector, Rwoga cell, Ruhome village, for seven years. They have two daughters aged 4 and 7, respectively. They space the births through family planning (FP) services in order to have time to improve their living conditions. This allowed them to build a house even if it still needs some finishing work.

“When you have a lot of kids, you can’t provide them with a balanced diet. I am able to buy eggs or raise chickens that regularly give eggs for two children. But I don’t have the option of doing it for five children, ”Usanase emphasizes.

His wife Triphine is delighted to have planned his births. This has enabled her to have well-nourished, well-educated children who attend elementary school and Early Child Development center (ECD) in the area.

“Too many children would have been a risk for me. They would have become street children and beggars. I plan to have a third child and stop there, “she says.

The assistant nurse of the Kigoma Health Center, Emmanuel Siborurema, informs that the women and men around this center agree to benefit from family planning (FP) services. This For sexually active young girls who want to avoid unwanted pregnancies benefit also services from this health center. However, they do not want their identity to be divulged for reasons of decency and respect for privacy. But they enter the FP offices without complex.

“We give good advice to people who have false perceptions about FP. We tell them that FP helps prevent malnutrition and stunted growth. A country that wants to develop and achieve growth imperatively integrate FP services into its agenda. 65% of women in the Kigoma sector receive FP services, and 3 men have benefited from vasectomy services since January 2021, ”he says.

In Ruhango District, the FP program is becoming increasingly popular in the community.

But what is even more important is that men have also signed up for this program and approximately 1,600 men have already had the vasectomy. This figure is increasing. This is a good sign that the FP program will be accepted, especially since women represent 50% of the population, and men as much.

“It is a good sign that people are willing to give birth to children whom they will raise decently and achieve prosperity goals for them. A household that no longer has the strength to work is no longer a pillar for the country, but a burden. We spend our time explaining that for a household, two children who have been well nourished, who have studied well, become more useful to the family than children who have grown up in poverty. It is good to fill the earth as the Bible preaches. But in this case we must be in good living conditions, ”he said.

He informed that the rate of malnutrition in Ruhango has dropped from 41% in 2018 to 28% today, while the country average is 31%. Of the 85,000 households in Ruhango, 12,000 households are in the first category of Ubudehe. Therefore, a child born in this category receives assistance so as not to live in poverty.

There are currently five children hospitalized for acute malnutrition (in the red). Those who are malnourished and followed at home (in the yellow) are 20. These two categories of 25 children mean children who were born with congenital health problems. The number of malnourished children this year 2021 was around 200.

The Mayor of Ruhango Habarurema expressed his gratitude to the Stunted Growth Prevention Project (SPPR) for its services to the District. He reaffirmed the commitment of Ruhango District to cure any child facing the problem of acute malnutrition.

This story was first published in Rwanda News Agency