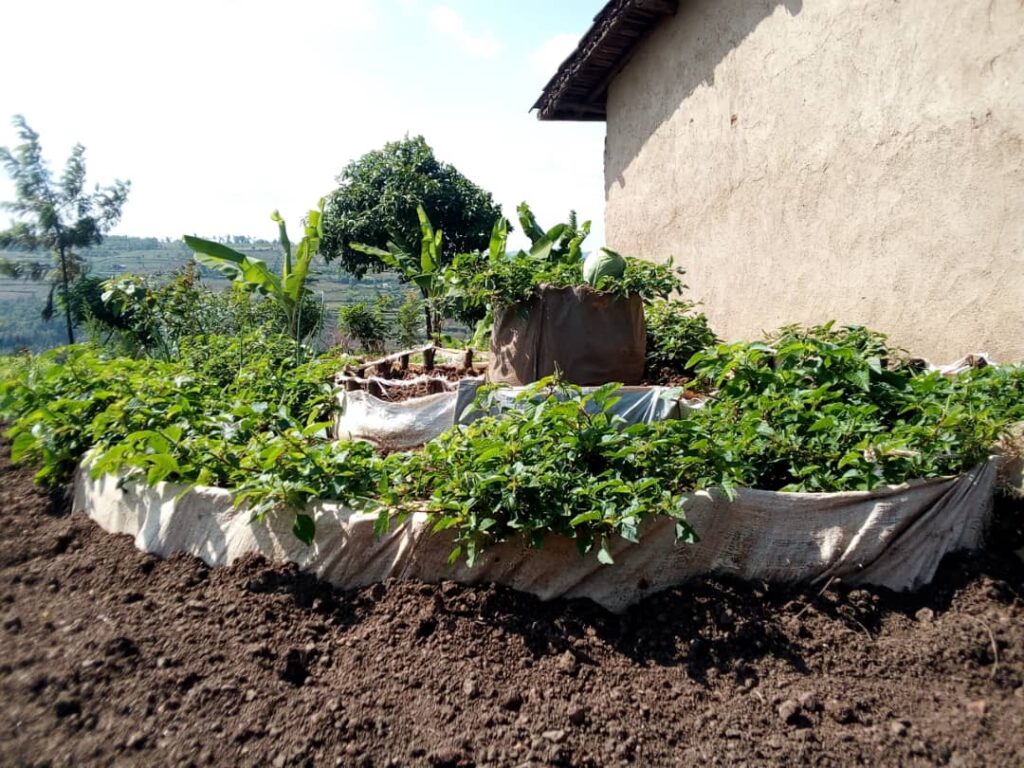 In Rwanda, kitchen gardening is helping women to fight malnutrition-related diseases such as Kwashiorkor, intestinal worms, and others in children. Malnutrition is a big problem in Rwanda because of mortality cases where about 21% of children die from malnutrition diseases.

The Rwanda Demographic Health Survey (RDHS) of 2014-2015 shows that 38% of children are stunted and early childbearing is one of the causes of malnutrition in Rwanda.

To reduce these rates, communities have ventured into kitchen gardening through the help of CorpsAfrica. The organization through its volunteers’ trains community members on how to construct and maintain a kitchen garden- a small garden about ten feet in diameter filled with a variety of vegetables, enough to sustain a large family with nutritious food.

The CorpsAfrica/Rwanda Volunteers engage in door-to-door education campaigns, promoting the benefits of kitchen gardens and offering both informational and technical support. As of May 2020, the volunteers had facilitated the creation of 760 Kitchen Gardens, according to their website.

According to Justin Nkunzimana, Communication Officer and volunteer at CorpsAfrica/Rwanda, they involve women in most of the kitchen gardening activities because they make up a bigger portion of the communities.

“As you see, there are some vegetables like beets, carrots, imbwija, and biringanya. Before I used to cultivate vegetables in my garden called ‘Imirambararo’, and a basket garden. I got a chance of being trained on ameliorated stairs’ garden. Then I started preparing a similar one in my home. I cannot buy vegetables at the market because they are near me. My grandsons have got a good nutrition-no kwashiorkor, no intestinal worms-because those vegetables fought malnutrition,” said Kamaliza Polina, one of CorpsAfrica trainees, Mara Sector.

Daria Mukarubuguza started a kitchen garden to tackle malnutrition after her grandsons were affected due to a lack of vegetables.

“Today, I can’t buy vegetables, like imbwija, intoryi, and cabbage. Before using kitchen gardens, my grandsons and daughter had signs of malnutrition-related diseases because their skin color was changing, they suffered hair loss, and had bigger cheeks. I picked some vegetables and gave them with porridge, and noted that those children are getting better without going to the doctor thanks to the kitchen garden,” she said.

Valentine Nyirahabineza who lives in Gitwa Village said that some vegetables she cultivates in the kitchen garden are tackling malnutrition-related problems.

“I don’t have any health problems because of the kitchen garden. Vegetables protect against diseases. I remember one day, I got ill and was required to get surgery, but at the same time, I had anemia. They gave me a blood transfusion but after being trained to prepare a kitchen garden I was able to grow beets. I can’t eat any food without beets. My weight is now increasing before I was in a bad condition which could be the consequence of malnutrition,” she said.

Annonciatha Kankesha, Huye district Vice mayor in charge of social affairs says that this initiative of introducing a Kitchen garden in the Rwandan community has contributed to tackling malnutrition-related diseases and boosted food security.

“To prevent malnutrition, we improve the kind of food a mother has to cook for her child and prepare for her family in order to avoid cases of those who are facing malnutrition difficulties,” she said.

Kankesha says that the biggest aim of the kitchen garden is to make good nutrition possible by having food with vegetables.

“We have field work to show and sensitize them on the importance of the kitchen garden. For those who don’t have one, we do campaigns to show them the contribution of the kitchen gardens.  Did you know that a family which has a child with no malnutrition develops? We have a field trip and we have some agricultural mobilizers and youth who live with those families which have low skills in the kitchen garden to help them. So isibo by isibo (village by village), we make something like competition to make those actions great,” she adds.

Despite this, the organization has a limited budget which hinders it from spreading the kitchen garden initiative to the rest of the country. It is only able to work in six districts instead of 30.

This story was first published in The Bridge Magazine